Your are in: Home / Who we are / Who’s who at DIY / Angela Chadwick, DIY Member 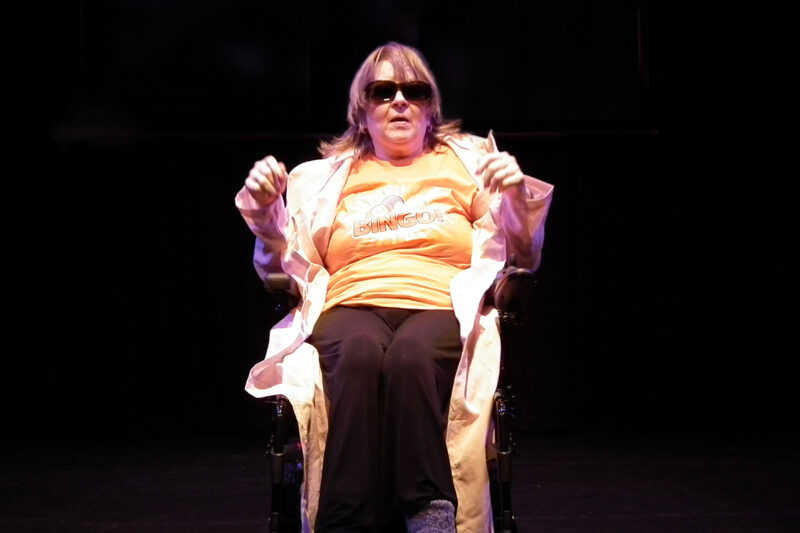 Angela centre stage, sharing ideas of choice and identity in our performance of “Following Patient 36” at Eccles Town Hall in 2019.

Angela Chadwick is one of the founding members of DIY Theatre Company. She has been in every core company production since the company started in 1994.

Angela brings lots of skills to the company. As well as being a stage actor Angela often does voice-overs for DIY’s shows and films. For our Following Patient 36 show Angela’s is the voice you hear on the moving film “Solitary Confinement” – watch it on our Following Patient 36 Vimeo Showcase. Angela has also been developing her film-making skills with the company, working with our film-maker Hilary Easter-Jones. An example of this is the “Picking up the Threads” film below.

Picking up The Threads : Process Film from DIY Theatre Company on Vimeo.

Angela is also an experienced drama leader and has been a member of our Friday Group since it began. She has co-led lots of drama projects in local schools and colleges.  Follow the links to watch Angela featuring in our “Discover Arts Award – Bury” and our “A Question of Leadership” films on DIY Theatre Company Vimeo.

We asked Angela some questions about herself:

Tell us one of your favourite things about DIY Theatre Co.

Tell us one of the things you are most proud of doing at DIY.

I’m proud of reading out a script at The Angel for everyone and doing the voiceovers for films. I’m proud that I’ve been a member of DIY for so long. I’ve done all the shows, like “Platform One” and “Strange Capers” and “Salford Streets”.

What else do you do, outside of DIY?

I go shopping on my own. I go out with my family and they take me shopping sometimes. I like to sit outside in the garden with my neighbours. I go camping every year. We’re in different patroles – one day we do cooking and one day we do everyone’s washing up – we take it in turns. And then we go on trips out. One year I went ice-skating and somebody was pushing me in the wheelchair. It was cold though.

What motto do you live by?

Don’t talk to my carer, talk to me!

Tell us about a piece of performance or visual art that has inspired you.

We went to see a play that Paula and Diane and Anna were in at The Lowry a long time ago. It was called “Love on the Dole”. I liked that – I just liked how they did it.

What makes you smile?

Take a look at the DIY members from over the years